Closing Remarks by FSC Chairperson Ambassador Armen Papikyan, Permanent Representative of the Republic of Armenia to the OSCE 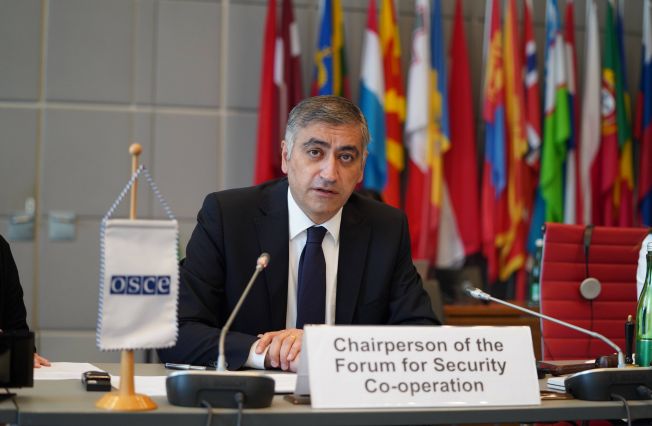 We have approached the closing session of the OSCE Forum for Security Co-operation under the Chairmanship of Armenia. It has been a particular privilege and great responsibility to lead this Forum again after 17 years. We regret that this time Armenia assumed the Chairmanship following the year when the peace and security have been challenged in the OSCE area of responsibility by massive use of force and war of aggression.

For our Chairmanship we have chosen the motto “Rebuilding trust and confidence through implementation of Politico-Military Commitments” since we envisaged to focus on the implementation and protection of the OSCE commitments with the ultimate aim of preventing further erosion of the concept of comprehensive and inclusive European Security. Hence, over the past 3 months we made significant efforts to promote the Forum as a key platform for a meaningful, genuine and open dialogue by discussing issues of major concern.

To that end, Armenian FSC Chairmanship held 9 Security Dialogues on a broad range of topics, such as compliance with international humanitarian law, challenges of new generation warfare, UNSC resolutions 1540 and 1325, arms control, disarmament, transparency in military exercises, SALW and SCA, as well as joint FSC-PC meeting to discuss the OSCE’s role and commitments to prevent and combat terrorism in all its forms.

I would like to briefly summarize the Security Dialogue discussions.

Recognizing the crucial importance of coordination and cooperation between various relevant international organizations and ahead of the 2021 Comprehensive Review of the status of implementation of resolution 1540, a Security Dialogue was organized on UN Security Council Resolution 1540 to exchange views on the threat posed by the proliferation of weapons of mass destruction to international peace and security, and OSCE’s role in support of global non-proliferation efforts. The discussions demonstrated how the threat of proliferation has changed since the adoption of Resolution 1540 and how the OSCE can effectively contribute to strengthening the global non-proliferation regime.

Conventional Arms Control and Confidence- and Security-Building Measures underpin OSCE’s concept of comprehensive, indivisible and common security, as well as the work of this Forum. Security Dialogues on Transparency in Military Exercises and Activities, and Arms Control and CSBMs were held with the aim to increase transparency and predictability among participating States and prevent further deterioration of security in the OSCE region.

The Security Dialogue on the Challenges of New Generation Warfare reflected the pace and scale of technological development in conventional arms domain and its potential impact on security in the OSCE area. The discussions revealed the need for more vigorous efforts towards unconditional and full implementation of our political-military commitments.

The Security Dialogue on Small Arms and Light Weapons and Stockpiles of Conventional Ammunition, focused on Practical Assistance Mechanism, highlighted the potential of the OSCE in assisting participating States to implement their commitments in the field of SALW and SCA, as well as the challenges associated with the application of the OSCE assistance mechanism.

Recognizing the important role of regional security arrangements in ensuring the peace and security in the OSCE area, Armenian FSC Chairmanship devoted a Security Dialogue to discussing Regional Security Arrangements, in particular, the CSTO to identify common security threats and explore the ways of enhancing the collaboration between the OSCE and CSTO.

Last week together with the Swedish Chairpersonship we organized a joint FSC-PC meeting on OSCE’s role and commitments to prevent and combat terrorism in all its forms in light of recent trends and challenges related to terrorism in the OSCE area, such as the growing use of new technology by terrorists and phenomenon of foreign terrorist fighters, including transfer and use of foreign terrorist fighters by Turkey and Azerbaijan against Artsakh during last year`s war of aggression, and their impact on the OSCE region.

We assumed our Chairmanship in a time of unprecedented challenges caused by the COVID-19 pandemic, which made our task more complex and demanding. Despite these challenges, a total of 34 keynote speakers took part in the Security Dialogues, and indeed we owe the success of our Chairmanship also to our outstanding speakers and those OSCE delegations who supported us and actively engaged in the discussions.

Allow me to express hope that the Security Dialogues organized by the Armenian FSC Chairmanship and thoughtful and insightful presentations by the keynote speakers contributed to frank and productive debate, and will lead to greater convergence of approaches among participating States.

I would now like to reflect on the developments within the FSC during the second trimester. In doing so I would focus on the following three particular points: challenges, achievements and the way ahead.

First, the challenges. Our Chairmanship’s main priority was to trigger genuine dialogue among participating States on the implementation of the OSCE commitments with the aim to prevent further deterioration of the security environment in the OSCE area. The war unleashed by Azerbaijan against Artsakh and its people in September 2020 reaffirmed the relevance of our priorities, which, by the way, were selected before the war, as well as our long-standing position that systematic and intentional violations of the OSCE arms control commitments endanger peace and security and pave the way for the use of force.

The Minister of Foreign Affairs of Armenia in his opening statement emphasized that peace and security in the OSCE area are challenged, moreover, the OSCE area seems to be fragmented into the core and periphery of the European security, which is observed in the disproportional attention towards different conflict and crisis situations in the OSCE area. The European security is further eroded as a result of disagreements among participating States on conventional arms control regime and CSBMs, as well as ineffectiveness of OSCE arms control mechanisms and their gradual erosion.

Deliberations in the FSC during our Chairmanship showed that these factors continue to challenge the security and stability in the OSCE area, and in particular in our region due to un-notified large-scale military exercises and activities. The lack of transparency and predictability, which as CSBMs tools are key to preventing conflicts and crises, further deepens the deficit of trust among participating States thus feeding into new cycles of tensions.

The fragmentation of the European security has been vividly expressed in the postponement of the Annual Security Review Conference. The Annual Security Review Conference, which reflects the position of our Organization on existing security challenges, was designed to address them without prioritization and in line with our shared commitments. Armenia as the Chair of the Forum for Security Co-operation and member of the OSCE showed responsibility and good faith in its efforts to contribute to the timely organization of the ASRC and we stand ready to continue our constructive engagement to that end. We concur with the Swedish Chairpersonship and OSCE participating States that it is of utmost importance to hold the ASRC, especially after a year of significant conflict, which resulted in thousands of casualties, large-scale displacement and enormous destruction. We believe that the OSCE participating States should show their commitment to the aims and objectives of the ASRC agreed by their Ministers of Foreign Affairs in 2002.

Second, our achievements. I commend our joint achievement in reaching consensus on a decision on the updated Best Practice Guide on National Procedures for the Destruction of Small Arms and Light Weapons. OSCE best practice guides are an important asset of this Organization that assist participating States in fulfilling their commitments with regards the destabilizing accumulation of small arms and light weapons and their illicit trafficking. I hope that such exemplary practices will prevail over disagreements in the work of this Forum.

On a similar note I am pleased that during our Chairmanship consensus has been reached on Decision concerning the date of the 2021 Meeting of the Heads of Verification Centres.

This directly brings me to my third and final point - a way forward to rebuilding trust and confidence. No matter how important OSCE political military commitments and obligations may look on paper, they cannot ensure security and confidence without the political will of the participating States. Current security crises demand not words but actions. Commitments are means to an end and not an end in itself. They are the reflection of the political will of participating States to address security challenges.

A genuine dialogue in the spirit of Helsinki, which at a time led to the establishment of the Conference on Security and Cooperation in Europe, is a prerequisite for sustaining the indivisibility of the European security, inadmissibility of the threat or use of force and for renewing respect for shared principles and commitments and reinvigorating the ideas of cooperation.

In closing let me thank the Swedish OSCE Chairpersonship and personally Ambassador Ulrika Funered and her FSC team for close and excellent cooperation. I express my appreciation to the delegation of the United States as it leaves the FSC Troika, and I reaffirm Armenia’s readiness to cooperate closely with the incoming Austrian Chairpersonship.

I would also like to take this opportunity and on behalf of the Armenian FSC Chairmanship express my gratitude to all our keynote speakers, FSC Co-ordinators, the OSCE Secretariat, in particular the FSC support Unit, Meetings Assistance Unit, Documents Distribution unit, ICT team, Media Relations Section, as well as our interpreters for their support and hard work.