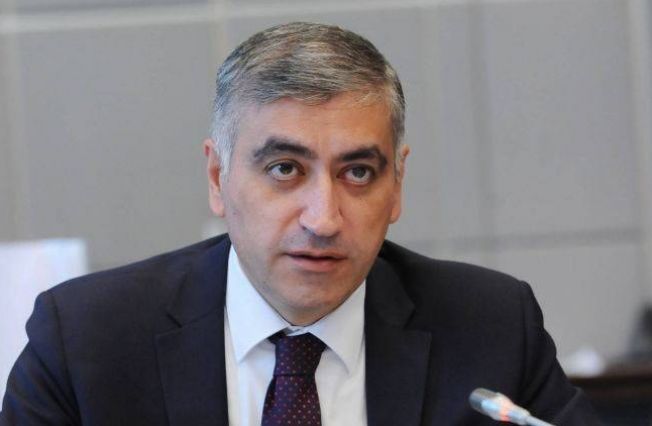 Three days ago, on 27 September 2021, Armenia and Artsakh commemorated the first anniversary of the outbreak of the war of aggression unleashed by Azerbaijan with the direct support and participation of Turkey and Turkish-backed foreign terrorist fighters and jihadists. Azerbaijan’s unprovoked war of aggression against Artsakh was accompanied by numerous atrocities and war crimes, including flagrant violations of international humanitarian law and human rights law. As a result of the 44‑day war, several thousand people were killed, many thousands were injured and tens of thousands of residents of Nagorno‑Karabakh were displaced. In the parts of Nagorno‑Karabakh which came under the control of Azerbaijan, the Armenian people were subjected to full-blown ethnic cleansing. Azerbaijan’s aggression also caused enormous damage to critical civilian infrastructure and to the environment.

The signing on 9 November 2020 by the leaders of Armenia, Azerbaijan and the Russian Federation of a Russian‑mediated trilateral statement on a ceasefire stopped the bloodshed and violence. One year later, however, a number of important issues contained in that statement still remain outstanding.

Moreover, the Nagorno‑Karabakh conflict remains unresolved, notwithstanding the claims of Azerbaijan to the contrary. The right of the people of Artsakh to self‑determination cannot be suspended through the use of force, nor can the conflict be considered resolved through the use of force. The Nagorno‑Karabakh conflict is awaiting its just settlement. This is evidenced by the statements of the Co-Chair countries emphasizing the need to resume the negotiation process on the basis of the well‑known principles.

The most pressing trilateral statement issue that remains unresolved is that of prisoners of war and civilian hostages held by Azerbaijan. As of today, more than 240 military personnel and 22 civilians are missing. Azerbaijan recognizes the detention of only 46 Armenian prisoners (43 military personnel and 3 civilians), who are being subjected to mock trials and lengthy illegal sentences on bogus charges. However, there is irrefutable evidence indicating that about 100 Armenian prisoners of war and civilians are illegally detained in Azerbaijan. Many of them appear in videos or photographs posted by representatives of the Azerbaijani armed forces on social networks. The testimonies of Armenian prisoners of war not only reveal shocking details concerning their torture and inhuman treatment in Azerbaijani captivity, but also clearly indicate that many of the missing persons were in Azerbaijani captivity, which makes their cases tantamount to enforced disappearances. Human Rights Watch and other watchdogs have provided detailed reports on this dire situation. Given Azerbaijan’s unapologetic disregard for international law, the fate of these people causes very serious concern.

In a resolution adopted two days ago, the Parliamentary Assembly of the Council of Europe explicitly stated that a fairly significant number of Armenians had been subjected to enforced disappearance and possibly killed.

Contrary to the official narrative of the Azerbaijani authorities and their clumsy attempts at denial, Azerbaijan’s attack on Artsakh was a pre-planned and carefully prepared act of military aggression.

This is clearly evidenced both by the actions of Azerbaijan in the pre-war period and by the policy pursued by Azerbaijan after the war. Constant threats of use of force by the Azerbaijani leadership for many years, rejection of international mediators’ proposals for a peaceful settlement of the conflict and strengthening of the ceasefire, continued ceasefire violations, excessive accumulation of offensive weapons and regular carrying out of offensive military exercises along the line of contact in violation of the Treaty on Conventional Armed Forces in Europe and the Vienna Document, refusal to join the call of the United Nations Secretary‑General for a global ceasefire, and post‑war statements denying the very existence of Nagorno‑Karabakh – all these things demonstrate that Azerbaijan was never interested in a peaceful and comprehensive settlement of the conflict.

The war of aggression was accompanied by gross violations of norms of international humanitarian law and human rights law. All the crimes committed by the Azerbaijani troops were thoroughly documented and registered with international organizations and specialized international bodies. The delegation of Armenia has distributed a number of relevant factual reports. Work in this direction will be continued on various international platforms, including the European Court of Human Rights and the International Court of Justice.

In this context, I wish to inform the Permanent Council that Armenia has filed a lawsuit against Azerbaijan for decades-long systematic violations of the provisions of the International Convention on the Elimination of All Forms of Racial Discrimination. We saw how the 44‑day war of aggression was accompanied by a surge in the manifestations of racial discrimination and State propaganda marked by anti‑Armenian hatred.

Azerbaijan’s Armenophobic State policy, which is also instilled in the younger generation through school and pre-school curricula, will have long‑term consequences that will inevitably lead to new war crimes and crimes against humanity. The so-called trophy park in the centre of Baku is a vivid reminder of this policy. We hope that the relevant institutions realize this potential threat and their responsibility to contain it today. This is an issue that deserves the most serious attention from the relevant international structures and mechanisms, including the OSCE Office for Democratic Institutions and Human Rights.

The war of aggression was waged in close co‑operation and co‑ordination with the politico-military leadership of Turkey, and under the Turkish military command.

Turkey’s active participation in the war of aggression against Artsakh has been confirmed both by the facts on the ground and the self-revealing statements of the Turkish and Azerbaijani leadership. The latest statement was made yesterday by Turkey’s presidential spokesperson Ibrahim Kalin, who said, and I quote: “The victory in Karabakh is of particular importance to us from the point of view of the Turkish armed forces ... We have carried out very successful military operations ... We have achieved such great success as a result of the good co-ordination of the actions of our Armed Forces, the Ministry of Foreign Affairs and the very flexible leadership of our President.” According to Ibrahim Kalin, this was the third victory, the first two being in Syria and Libya.

For years, the Armenian delegation has voiced Armenia’s concerns about the Turkish leadership’s power projection policy, which has a clear anti-Armenian edge. The war of aggression against Artsakh and Turkey’s direct involvement in it have once again confirmed the validity of these concerns.

In previous statements we have also said that Turkey could have played a constructive role in the region, provided it abandoned its old nationalistic narratives and neo‑Ottoman policies. Unfortunately, this has not happened. Turkey’s actions and words show the contrary to be true, notwithstanding its constant claim to desire peace in the region, which rings hollow in the light of its actions.

The use of foreign terrorist fighters in the Nagorno-Karabakh conflict has been widely recognized and noted by a considerable number of heads of State, intelligence services, well‑known experts and journalists. The United Nations Working Group on the use of mercenaries has stated publicly that since August 2020, Turkey and Azerbaijan have been involved in recruiting fighters through armed groups affiliated primarily to the “Syrian National Army” for deployment to Azerbaijan in support of Azerbaijan’s military operations in the Nagorno‑Karabakh conflict zone. Many of these fighters agreed to support the Azerbaijani armed forces in exchange for monetary reward. It is noteworthy that the transfer of foreign terrorist fighters was also carried out with the help of a civilian airline operating in Azerbaijan.

In the absence of a proper and consolidated response on the part of the international community, Azerbaijan and its allies continue to ardently deny the facts. In addition, they continue to utilize the tactics of reusing and replicating identical accusations in reverse order in an attempt to whitewash their wrongdoings and/or mislead the international community. Despite the facts being well documented and proven by Armenia and others, Azerbaijan continues to repeat and disseminate its own fictional narrative about Armenia’s alleged use of foreign fighters and mercenaries or prohibited munitions, including munitions containing white phosphorus. Moreover, such claims are also made with reference to the first Karabakh war. According to the same logic, a few days after Armenia’s complaint to the International Court of Justice, Azerbaijan filed the same suit in the same court in an attempt to balance the situation.

Azerbaijan continues its provocative actions on the line of contact with Artsakh and on the border with Armenia, periodically escalating tensions in the region. On 28 September, an Armenian soldier was wounded in the Gegharkunik region of Armenia as a result of shots fired from Azerbaijani positions. It is noteworthy that this provocation came shortly after the agreement reached on the margins of the United Nations General Assembly in New York between the Co-Chairs of the OSCE Minsk Group and the Foreign Ministers of Armenia and Azerbaijan on the resumption of the Nagorno-Karabakh peace process within the framework of the OSCE Minsk Group Co-Chairmanship. We strongly condemn these provocations and call on Azerbaijan to engage constructively in the negotiation process under the auspices of the Co-Chairs of the OSCE Minsk Group.

For its part, Armenia has repeatedly expressed its readiness to engage constructively and take appropriate measures aimed at de-escalation and the addressing of humanitarian issues. To overcome the present situation, the Prime Minister of Armenia has suggested that the armed forces of both Armenia and Azerbaijan withdraw simultaneously to the border of Soviet times and that international observers be deployed along that border and a delimitation and demarcation process be initiated under international auspices.

In stark contrast to this, the address of the President of Azerbaijan at the 76th Session of the United Nations General Assembly was full of threats, warmongering rhetoric, hate speech, aggressive nationalism and territorial claims against Armenia. One would have to be immensely imaginative and indeed deluded to consider the address a “call for peace”.

For obvious reasons, the issue of delimitation and demarcation of the Armenia-Azerbaijan border cannot be negotiated against the backdrop of almost daily shootings and various provocations on that border and the illegal presence of units of the armed forces of Azerbaijan on the sovereign territory of the Republic of Armenia since 12 May 2021.

The current situation in Nagorno-Karabakh is the result of a flagrant violation by Azerbaijan of several core principles of the Helsinki Final Act, namely, refraining from the threat or use of force; peaceful settlement of disputes; equal rights and self-determination of peoples; and respect for human rights and fundamental freedoms. No one should be under any illusion that the results of the use of force, accompanied by war crimes and violations of international humanitarian law, can ever become the basis for a lasting and sustainable peace. Such peace can be achieved in the region only through a comprehensive settlement of the Nagorno‑Karabakh conflict, which must include the determination of the status of Artsakh on the basis of the realization by the people of Artsakh of their inalienable right to self‑determination; the ensuring of the safe and dignified return of displaced population to their homes; and the preservation of the historical and religious heritage of the region.