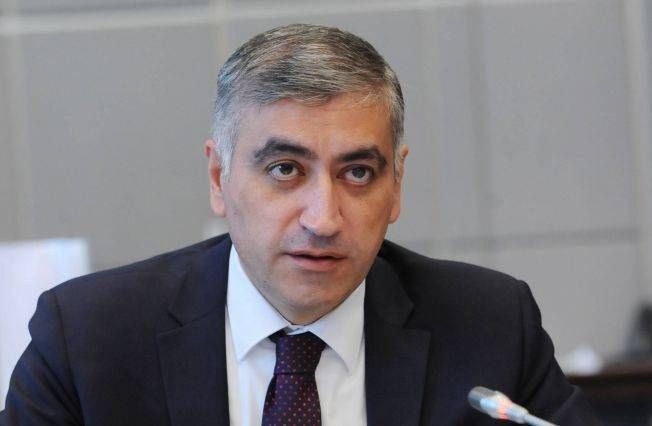 I should like to start by informing the Permanent Council about the situation on the ground and the continued provocations by the Azerbaijani armed forces along the line of contact in Artsakh and the Armenia-Azerbaijan State border.

At the last meeting of the Permanent Council on 11 October, we informed participating States about the murder by sniper fire of Aram Tepnants, a civilian from the occupied village of Mataghis who was working on a field near the town of Martakert in the presence of Russian peacekeepers. The fact that the shot was fired from the Azerbaijani side was confirmed by the Russian peacekeepers.

On 14 October, in another gross violation by the Azerbaijani armed forces of the ceasefire established by the trilateral statement of 9 November 2020, six soldiers from the Artsakh Defence Army were wounded near the village of Norshen in Artsakh. The Azerbaijani military continued its ceasefire violations the next day, 15 October, by opening fire at a medical vehicle of the Defence Army in the north-east of Artsakh.

On 15 October, the Azerbaijani armed forces opened fire in the direction of the Armenian village of Yeraskh, on the western segment of the Armenia-Azerbaijan State border, setting fire to and damaging several buildings.

This was the second serious violation of the ceasefire by Azerbaijan within a week, targeting both civilians and military personnel. In its various statements, the Ministry of Foreign Affairs of Armenia has stressed the need for these crimes to be properly investigated and the perpetrators brought to justice.

The Armenian delegation has repeatedly raised here at the Permanent Council the plight of Armenian prisoners of war and civilian hostages held by Azerbaijan contrary to, and in violation of, the requirements of international humanitarian law and the trilateral ceasefire statement of 9 November 2020. This is the most pressing issue related to the trilateral statement that still remains unresolved.

We acknowledge and thank those of our international partners who continue to raise this issue bilaterally and in multilateral forums, calling on Azerbaijan to comply with its obligations under international humanitarian law and the trilateral statement and to release all the prisoners of war and civilian hostages in its custody. In this regard, I wish to inform delegations that two days ago, after almost one year of illegal captivity, five Armenian prisoners of war returned to Armenia, with the assistance of Russia.

At the same time, Azerbaijan continues to conceal the real number of Armenian prisoners of war. Moreover, the mock trials and the handing down of lengthy sentences on bogus charges against prisoners of war illustrate the anti-Armenian hate policy and smear campaign adopted and promoted in Azerbaijan at the highest level.

This attitude or, rather, policy of racial discrimination that has persisted in Azerbaijan for decades manifested itself most clearly during last year’s war, which in the course of 44 days resulted in widespread and systematic violations of international humanitarian law and international human rights law.

We have predictably seen energetic attempts by Azerbaijan to twist and manipulate international law, including international humanitarian law, with the aim of covering up the atrocities and war crimes that it committed during the 44-day war of aggression. This includes attempts at whitewashing its misdeeds by mirroring the actions of Armenia and making allegations that are, however, utterly groundless, unsubstantiated and manipulative.

Despite this long-standing tactic of Azerbaijan, which is clearly aimed at establishing ostensible parity between the sides, Armenia will continue to denounce the policy of anti‑Armenian racial discrimination pursued by Azerbaijan.

In this regard, I should recall that we have already informed the Permanent Council of the case filed by Armenia at the International Court of Justice regarding the systematic violations by Azerbaijan of the provisions of the International Convention on the Elimination of All Forms of Racial Discrimination – violations that intensified during the war of aggression. Armenia brought the case to the Court after almost one year of negotiations that failed to yield any result.

Yesterday, the Court concluded the public hearings in relation to the requested provisional measures. The hearings themselves were extremely important, since they provided the general public with an opportunity to learn about the extent and depth of the anti‑Armenian racial discriminatory policy conducted by the Azerbaijani leadership for decades. Successive generations of Azerbaijanis have been indoctrinated with a culture of fear and hatred towards everything Armenian.

Murder, torture and other forms of inhumane or degrading treatment of ethnic Armenians who find themselves under the authority of Azerbaijan are carried out systematically, as are the rewarding and even glorification of the perpetrators, together with the persecution of anyone who dares to question the official dogma.

The continuous destruction of Armenian cultural heritage and religious sites in the areas of Artsakh that fell under Azerbaijani control and the negation of their Armenian origin are further manifestations of anti-Armenian racial discrimination.

Using its mirroring tactic, which I have already mentioned, Azerbaijan also filed a case against Armenia at the International Court of Justice, invoking the Convention on the Elimination of All Forms of Racial Discrimination. However, Azerbaijan was unable to establish any plausible link to rights arising under the Convention.

One of the main arguments exploited by Azerbaijan during the public hearings had to do with the laying of landmines, which was presented as an example of a policy of racial discrimination. Setting aside the fact that landmines are not a discriminatory type of defensive weapon, Armenia has no legal or political obligation with regard to these landmines, which were first and foremost the result of the first Nagorno-Karabakh war and were used as a line of defence. Moreover, it is worth stressing that hundreds of thousands of landmines were laid by Azerbaijan itself in the early 1990s. The presence of mines in the conflict region has affected everybody.

Here at the OSCE at least it should be well known that Armenia for decades strove to complete comprehensive demining activities, which it considered to be a purely humanitarian issue. However, Azerbaijan persistently blocked all such humanitarian efforts because the people of Artsakh would have been the primary beneficiaries. Only now, when these territories have been ethnically cleansed and/or Armenians have been forced to flee, does Azerbaijan suddenly discover the value of demining and begin to request assistance from the OSCE and its participating States.

I should emphasize once again, for the record, that Armenia has no legal or political obligation whatsoever with regard to landmines. The attempts by some delegations to link and establish an equivalence between demining and the return of prisoners of war, which is an obligation of Azerbaijan under the Geneva Conventions of 1949 and their Additional Protocols as well as a commitment under the trilateral statement of 9 November 2020, do not stand up to scrutiny.

More than one year has passed since the establishment of the ceasefire that halted the hostilities of the second Nagorno-Karabakh war. Unfortunately, though, the situation in the region remains highly volatile.

Azerbaijan continues its provocative actions along the line of contact with Artsakh and on the border with Armenia, periodically escalating tensions in the region. Following the illegal incursion by units of the Azerbaijani armed forces into the sovereign territory of the Republic of Armenia on 12 May 2021 and their presence there ever since then, Azerbaijan also continues to intimidate the border residents of Armenia, creating an atmosphere of fear, depriving them of their livelihoods and forcing them to flee from their homes.

The Armenian delegation has continuously warned the international community – during and after the 44-day war – of the imminent prospect of the conflict spilling over beyond the region and leading to the involvement of other actors. These concerns are still valid.

We are also concerned about the timing of the aforementioned recent escalation, which has occurred so soon after the meeting of the Foreign Ministers of Armenia and Azerbaijan in New York facilitated by the Co-Chairs of the OSCE Minsk Group. That meeting at the end of September was seen by many as a sign of prospective revitalization of the peace process and as heralding a much needed and long‑overdue visit by the Co-Chairs to the region. We do not consider this escalation to be a coincidence.

Azerbaijan’s bellicose and aggressive statements and hostile actions continue to destabilize the region. Each escalation, provocation and ceasefire violation makes the prospect of achieving peace and security seem ever more remote.

Moreover, in an attempt to evade responsibility for its non-implementation of the requirements of the trilateral statement, Azerbaijan continuously distorts the essence of its provisions. We should be accustomed by now to the continued manipulative statements and rhetoric by Azerbaijan here in this room: today will not be an exception.

The current situation in Nagorno-Karabakh is the result of a flagrant violation by Azerbaijan of several core principles of the Helsinki Final Act, namely refraining from the threat or use of force; the peaceful settlement of disputes; equal rights and self-determination of peoples; and respect for human rights and fundamental freedoms. No one should be under any illusion that the results of the use of force, accompanied by war crimes and violations of international humanitarian law, can ever become the basis for a lasting and sustainable peace. Such peace can be achieved in the region only through a comprehensive settlement of the Nagorno-Karabakh conflict, which must include the determination of the status of Artsakh on the basis of the realization by the people of Artsakh of their inalienable right to self‑determination; the ensuring of the safe and dignified return of displaced population to their homes; and the preservation of the region’s historical and religious heritage.

Madam Chairperson, I kindly ask you to attach this statement to the journal of today’s meeting.