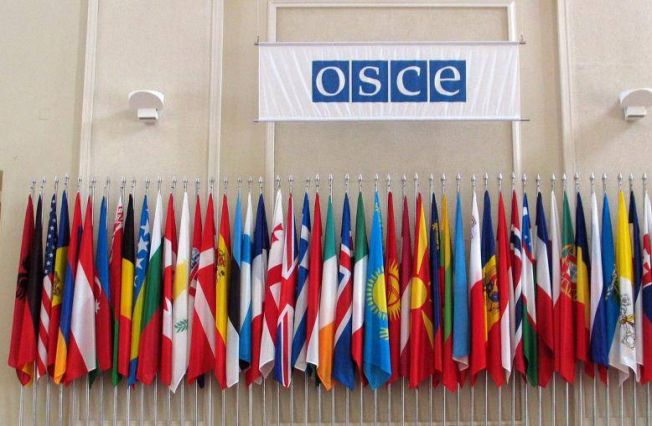 The delegation of Armenia would like to update the Permanent Council on the ongoing tense and highly unstable situation along the line of contact in Artsakh following the infiltration of the Azerbaijani armed forces into the village of Parukh and adjacent territories of Artsakh on 24 March.

As a result of Azerbaijan’s latest aggression and flagrant violation of the trilateral statement of 9 November 2020, up to two hundred women, children and elderly people have been displaced from their homes in the villages of Parukh and Khramort and have been deprived of their basic rights to life, security and education.

We expect that the Russian peacekeeping forces will continue to undertake all necessary measures to ensure the immediate return of Azerbaijani troops to their initial positions and adherence to the commitments under the trilateral ceasefire statement of 9 November 2020, thus allowing the peaceful residents to return to their homes.

The invasion of the village of Parukh by the Azerbaijani armed forces was preceded by constant and systematic shelling of Armenian settlements and civilian infrastructure; furthermore, threats were made by the Azerbaijani side through loudspeakers against the peaceful population of several villages of Artsakh to induce them to leave their homes.

In an atmosphere of complete impunity and permissiveness, Azerbaijan has intensified its violations of the human rights of the people of Artsakh, resorting to various methods of psychological and humanitarian terror. For almost 20 days, owing to the interference and manipulations of the Azerbaijani side, more than 120,000 people throughout Artsakh were deprived of natural gas supply, which in the conditions of abnormally cold weather put the entire population on the brink of a humanitarian catastrophe. All schools and kindergartens were closed owing to the impossibility of heating. According to the Ombudsperson of Artsakh, the temperature in hospitals at best reached 15 degrees Celsius, which affected the treatment of 51 newborns and their mothers in maternity wards.

Nor is all this a matter of isolated cases. The Azerbaijani side constantly and systematically resorts to the use and threat of force, depriving the rural population of their only means of subsistence. As we all know, Article 3 of the Universal Declaration of Human Rights runs as follows: “Everyone has the right to life, liberty and security of person.” Azerbaijan must receive a clear signal that at all times and under all circumstances, the protection of these inalienable rights cannot be compromised.

While the OSCE Minsk Group Co‑Chair countries and other representatives of the international community, including the press service of the Russian Ministry of Defence, gave a clear assessment of the latest escalation of the situation in Nagorno‑Karabakh, recognizing that it was due to the movement of Azerbaijani troops, the Azerbaijani authorities, in clear defiance of the trilateral ceasefire statement of 9 November 2020, have claimed that “the positions and locations in the region were being clarified”.

To refresh their memory, let me quote the very first provision of the said ceasefire statement, which reads: “We hereby declare that a complete ceasefire shall be established and all hostilities shall be stopped in the Nagorno-Karabakh conflict zone as of 00:00 Moscow time on 10 November 2020. The Republic of Azerbaijan and the Republic of Armenia, hereinafter referred to as the Parties, shall remain at their current positions.”

Recently, the delegation of Azerbaijan went even further in their disregard for the provision, claiming that they were entitled to move their military forces as much as they liked. Moreover, they stated that they would continue to do so for as long as they deemed it necessary. Such statements indicate that the Azerbaijani side completely disregards and does not consider itself bound by its international obligations and commitments, including the trilateral statement of 9 November 2020. It is clear that this is the result of the impunity and permissiveness it has enjoyed after its flagrant violations of international law, including international humanitarian law and human rights law.

Moreover, Azerbaijan’s statements constitute an indirect threat of force that undermines the principles of international law, in particular the principles of the Helsinki Final Act relating to refraining from the threat or use of force and to the peaceful settlement of disputes.

To put the record straight, it is worth recalling that this is not the first violation by Azerbaijan of the said provision of the trilateral ceasefire statement of 9 November 2020. Allow me to recall that on 11 December 2020, just a month after the signing of the ceasefire statement, the Azerbaijani armed forces, in flagrant violation of their commitments under the trilateral statement, attacked the positions of the Artsakh defence army near the villages of Hin Tagher and Khtsaberd of the Hadrut region of Artsakh, occupying the two villages and adjacent territories. The Armenian forces were in the positions they held at the time of the signing of the trilateral statement, which dispels the false Azerbaijani propaganda about so‑called sabotage groups. However, this did not prevent Azerbaijan, not least on account of the lack of a clear assessment of what happened, from presenting the captured Armenian servicemen as “saboteurs and terrorists” and prosecuting them on trumped-up charges and confessions obtained under duress, in a clear and blatant violation of international humanitarian law. At present, more than 30 servicemen are still in Azerbaijani captivity facing mock trials. And this is another flagrant violation of the trilateral statement.

In this connection, I would like to draw your attention to the latest report by Amnesty International confirming the number of persons that Azerbaijan is holding in captivity in Azerbaijan. The report confirms the concern expressed by the Council of Europe that dozens of captives continue to be held in inhumane conditions and are being subjected to hasty and unfair trials, while the fate and whereabouts of around 30 Armenian captives remain unknown, putting them at risk of enforced disappearance and possible killing.

It should also be emphasized that, by contrast with other conflicts in the OSCE area, the Nagorno‑Karabakh conflict has been accompanied by atrocities and ethnic cleansing, carried out by Azerbaijan. In the territories that came under the control of Azerbaijan, Armenian civilians who were unable to escape have been killed, beheaded, and their bodies mutilated. Today, not a single Armenian remains in these territories to protest or rally round, or to be abducted or arrested. This is the reality on the ground, and this reality speaks volumes about the failure to protect international humanitarian law and international human rights law.

Unfortunately, Azerbaijan continues to act with complete impunity, with the tacit connivance of the international actors. With every passing day, Azerbaijan continues its destructive and hostile actions aimed at creating unbearable living conditions for the people of Artsakh, including the cutting off of vital supplies and shelling of villages, schools and residential houses. Using various methods of psychological warfare, Azerbaijan is continuing its long‑standing policy of ethnic cleansing and expulsion of the Armenians of Artsakh from their historical homeland.

Obviously, these are not the actions of a State that wants peace.

Azerbaijan resorts to such human rights violations in the absence of a clear and adequate response from the OSCE and its institutions. We see that the OSCE Polish Chairmanship does not consider these events as something that deserves its reaction or attention. Similarly, we deplore that the OSCE, with its widely advertised early warning and early action tools, does not see any role for its engagement. Let me make it clear that this behaviour on the part of the OSCE and its executive structures is weakening the foundations of the Organization and undermining its credibility. This is clearly not what the people of Armenia expected from joining the OSCE.

We once again call on the Chairperson‑in‑Office, the OSCE institutions and executive structures, and the participating States to demonstrate consistency in their work to protect human rights, to give a clear assessment of Azerbaijan’s violations of international humanitarian law and international human rights law, and to condemn its provocative actions aimed at undermining regional peace and security, sending a clear message that such actions will have consequences for the aggressor. We call on our partners to support efforts to establish peace in the South Caucasus and achieve a peaceful and comprehensive settlement of the Nagorno‑Karabakh conflict.

We also invite the distinguished Chairperson‑in‑Office to exercise the utmost vigilance when it comes to wording and formulations with regard to the Nagorno‑Karabakh conflict, which remains unresolved due to the aggressive and non‑constructive position and actions of Azerbaijan.

In closing, let me reiterate that the Government of Armenia is committed to all efforts to bring peace and prosperity to the region. To this end, it has adopted a strategy of opening an era of peaceful development in the region and is resolutely taking necessary steps in this direction. Reaching a lasting and durable peace in the region remains one of its highest priorities.

I request that this statement be attached to the journal of today’s meeting.