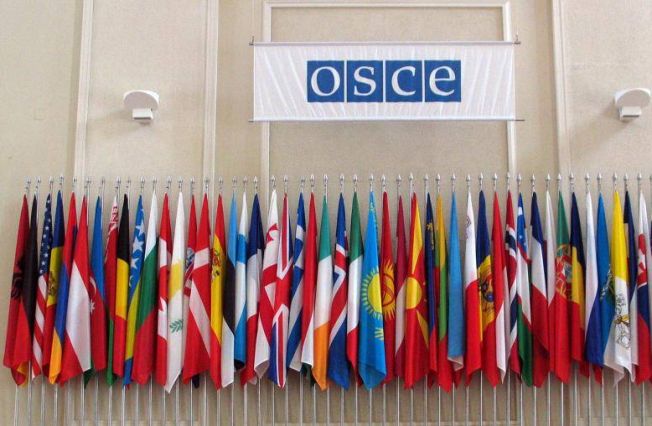 Since the last meeting of the Permanent Council and from 13 September 2022 onward, when the Azerbaijan conducted large-scale aggression against the sovereignty and territorial integrity of Armenia, the situation on the border between Armenia and Azerbaijan and in the region as a whole remains extremely tense. Azerbaijani armed units continue their illegal presence in some parts of the sovereign territory of Armenia, which not only poses a serious threat to regional security and stability, but also disrupts the daily life and livelihood of residents of the towns and villages that have been subjected to aggression and attack. Until now, thousands of residents of these regions are not able to return to their homes due to certain security and safety risks. Thus, on 3 October, at 21:30 local time, Azerbaijan resorted to another violation of the ceasefire and fired at the positions of the Armenian armed forces using mortars and large-caliber weapons.

Last night, from 19:40 to 20:00 local time, the Azerbaijani armed forces again using mortars and large-caliber weapons fired at the Armenian positions in the eastern direction of the border. This latest violation of the ceasefire occurred on the eve of the planned meeting between the Prime Minister of Armenia and President of Azerbaijan. This is very symptomatic and once again testifies to the absence of political will on part of the Azerbaijani leadership to work towards building peace and security in the region.

We have informed the Permanent Council of the exceptional brutalities and atrocities, torture, mutilation and desecration of the bodies of fallen soldiers, including women soldiers, who defended their homeland. Following the horrific videos of Armenian servicewomen subjected to the most degrading and inhuman treatment that is even hard to imagine, just a few days ago, another video appeared and was widely disseminated in the Azerbaijani segment of social media, in which special units of the Azerbaijani armed forces willfully kill Armenian prisoners of war.

In this video, Armenian POWs are brutally executed with a round of gunshots at point-blank range. The footage clearly shows that these hors de combat, unarmed and not resisting, were sitting on their knees and were surrounded by outnumbering Azerbaijani soldiers. The authenticity of the video, as well as the identification of the location and time, leave no doubt that this war crime was committed during the 13 September aggression and took place on the sovereign territory of Armenia.

Armenia strongly condemns these abhorrent war crimes and violations of international humanitarian law. We thank those of our international partners who gave clear-cut assessments and made targeted calls regarding these war crimes. At the same time, we are deeply disappointed by the silence of some of others, who are quick to respond and condemn similar violations elsewhere, but now, acting in their own narrow and selfish interests, are hiding behind the so-called “neutral” and “balanced” approach.

Unfortunately, these cases are not isolated or one-off incidents, but rather a recurring feature of any engagement of the Azerbaijani armed units, especially its special forces. Back in 2004, Azerbaijani officer Ramil Safarov axed to death a sleeping Armenian officer Gurgen Margaryan in Hungary, where both were participating in NATO training courses. Safarov was convicted of first-degree premediated murder and sentenced to life imprisonment. However, in 2012, after he was transferred to Azerbaijan to serve the remainder of his sentence there, he was immediately pardoned upon his arrival by the decree of President Aliyev, given a hero welcome and promoted in rank.

We have also witnessed gruesome violations of international humanitarian law by the Azerbaijani special forces in 2016, during the April 4-day war, with cases of torture, mutilation of the bodies of killed civilians, as well as beheadings of captured Armenian soldiers.

The 44-day war of aggression against Artsakh and its people was also accompanied by wide-spread violations and war crimes. This time, however, numerous videos were widely circulated on social media, or even worse, sent to relatives of fallen soldiers as part of a targeted and well-calculated psychological warfare tactic.

Armenia has persistently raised this issue not only in political settings but also before the relevant international legal bodies. While we demand that each and every case be investigated in order to punish the perpetrators, we also stress that the recurring and wide-spread nature of these crimes committed by the Azerbaijani military is the result of a deliberate and systematic policy of dehumanization and hatred towards the Armenian nation pursued for decades by the highest political leadership of Azerbaijan.

What we see today is the modus operandi deeply entrenched in the rules of engagement of the Azerbaijani armed forces, which is on a par with such terrorist organizations as ISIS and its affiliates. Therefore, while individual perpetrators should be identified and held accountable for these barbaric acts, the political leadership of Azerbaijan must also be held equally accountable for its hateful and xenophobic policies and propaganda.

The fact that the leadership of Azerbaijan has never disassociated itself from these despicable war crimes also comes to prove that the commission of such barbaric acts was and is condoned by the politico-military leadership of Azerbaijan and it should bear full responsibility for these crimes, including by imposing sanctions against all persons affiliated with these crimes.

Armenia categorically rejects the approach of resolving issues through the use or threat of force. The Government of Armenia is ready and willing to engage in a constructive dialogue with Azerbaijan to work towards building peace, safety and security in the region.

We also believe that the deployment of an international observer mission to Armenia would effectively contribute to preventing further escalation and would serve as a deterrence against new aggression by Azerbaijan.

We are convinced that sustainable peace in the region can only be achieved if it is pursued in a genuine manner. Unfortunately, the rhetoric of the Azerbaijani leadership attests to anything but to a genuine commitment to the peace process.

While we reiterate Armenia’s commitment to building comprehensive peace, stability and security in the South Caucasus through peaceful negotiations, we insist that, first of all, the Azerbaijani armed forces must be withdrawn from the sovereign territory of Armenia, and all Armenian prisoners of war and civilian detainees must be immediately released. Azerbaijan must disengage its armed forces, cease its provocations and aggression, and strictly observe the ceasefire regime. Azerbaijan must also strictly comply with its obligations and commitments, including those under the 9 November 2020 Trilateral Statement, and genuinely commit, not in words but in deeds, to peaceful negotiations to resolve all issues in a comprehensive manner.

I have already said, but let me reiterate once again that Armenia, for its part, is committed to working together to build a comprehensive peace, stability and security in the South Caucasus.